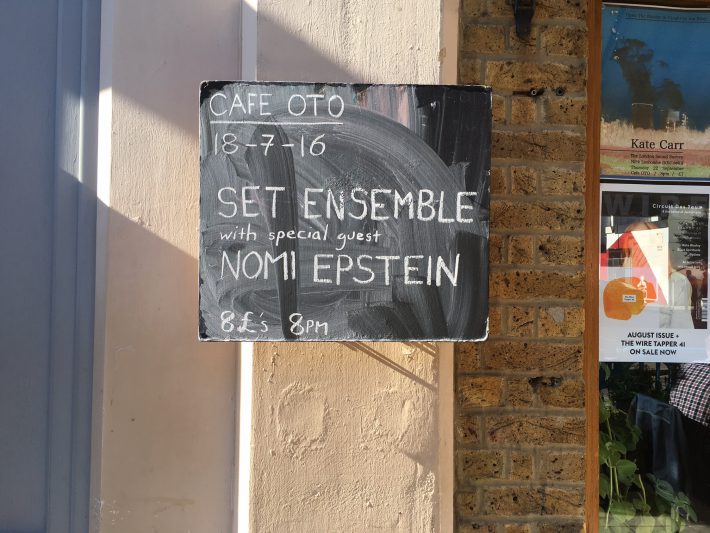 Performed at an evening of music by The Set Ensemble, with special guest, Nomi Epstein:

Founded in 2010 in Oxford, The Set Ensemble is dedicated to the performance of experimental music and contemporary composition. The exact composition of the group shifts from performance to performance, but all the members of the ensemble are also composers and they often write for one another, using the group as a testing ground for new ideas and approaches. Their debut CD, Stopcock, was released recently on the Consumer Waste label, and their work is also featured extensively on the Wandelweiser und so weiter box set on Another Timbre.

Nomi Epstein is a Chicago-based composer, curator/performer of experimental music, and educator. Her compositions have been performed throughout the US and Europe by ensembles such as ICE, Ensemble SurPlus, Wet Ink, Mivos Quartet, Wild Rumpus, and Dal Niente. In February 2015, her recent conceptual opera, Translation, was premiered by The Industry and Wild Up in Los Angeles. She is founder/ curator of the critically acclaimed, experimental music performance collective a.pe.ri.od.ic, and also performs in the experimental improvisation trio, NbN. She produced the Chicago area centennial John Cage Festival in 2012, co-produced the Chicago Wandelweiser Festival in 2014, and continues to research, write, and lecture on post-Cagean, notated, experimental music.